So you just pulled up to your driveway from a long workday and noticed a huge football size beehive hanging off a tree branch, a rain gutter, fence, etc. That beehive is actually called a bee swarm. These clusters of hundreds, if not thousands of bees is in-between homes and are in search of their next resting/nesting location. That location could permanently be their next home or worst they could end up entering a hole-in-the wall like your chimney, attic vents, stove/bath vent, or wall. These ?bee swarms? can be pretty docile but can also get out of control pretty quickly. The slightest movement or noise can trigger a defensive formation where soldier bees as well as the whole colony can attack. It is highly recommended that you do not attempt to eradicate the bees yourself. You are better off leaving them alone or call a professional. Most other companies might recommend waiting a few days to see if they’ll leave on their own. We however DO NOT recommend this. For one, having bees on your property is dangerous. They can attach your family, your pets, and your neighbors. This is a huge liability and can get pretty expensive if someone ends up in the emergency room. Secondly, the chances of them leaving is high, however, the chances of them ending up in your wall, chimney, attic, roof, jacuzzi/spa is as equally high. And once they are there, the cost of removing them also increases due to them being in the structure, which might entail some demolition and repair work. So if you see these bee swarm, call us immediately to have them safely relocated far far away from your home. 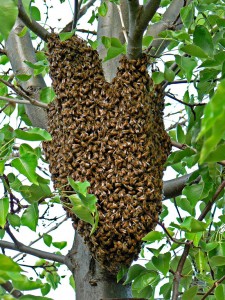 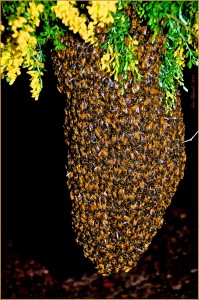 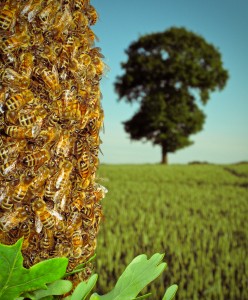 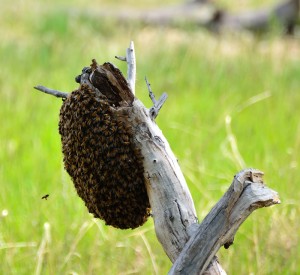 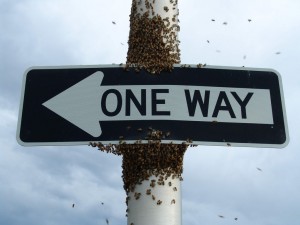 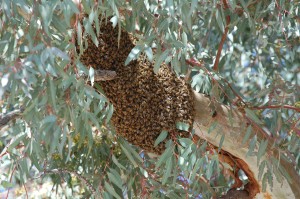 There are different techniques that are used when picking between bee and wasp removal services.  You need to know which insect you are dealing with before proceeding.

The term “bee” broadly includes all types of wasps as well.  Many people lump all buzzing insects together as bees.  While the bees and the wasps all belong to the same order of Hymenoptera (meaning “membranous wings” and includes ants, bees, wasps, horntails, and sawflies), they have quite a few similarities and differences that can help identify them as one or the other.  Knowing the difference may not seem like a big deal but it makes all the difference to a specialist who deals with bee and wasp removal services.

The main cause of concern both the bees and the wasps brings are their stingers.  The characteristic stinger is a similarity between both types of insects; however, there are small differences in their stingers that can be used to identify them as one or the other.  Both a bee’s and a wasp’s stinger will have barbs that point backwards to cause penetration on the stinger’s victim.  After a bee sticks its stinger in to its victim, the bee will live and be able to sting again with the exception of the honey bee workers.  If the honey bee workers’ stinger is pulled completely out of the bee’s abdomen, then the bee will die.  The honey bee is the single type of bee that only gets one sting to give out and it proves fatal for the bee.

Wasps have smaller barbs on their stingers.  Like most bees, a wasp’s stinger can be removed and the wasp will continue to live even after handing out its first sting.

The tell tale sign to look for when identifying an insect between a wasp and a bee is its body shape.  A bee will tend to have a rounder body.  A bee’s body will look very fuzzy and hairy.  A wasp’s body is just the opposite with a slender shape and smooth exterior.  Both of these insects will have a narrow junction between their thoraxes and abdomens.

The final characteristic to look at has to do with the actions of a bee or a wasp.  These can be noticed if you are closely observing their behaviors and are not close enough to look at physical traits.  A bee feeds on pollen and nectar while a wasp is a predator.  Some would also call a wasp a parasite as they feed on other insects and are scavengers.

By knowing one or more of these characteristics, you can correctly identify what type of insect you are dealing with.  The type of insect you have on your hands is important if you are trying to remove or control them.  If you are still unsure which type you have, an insect specialist will know and can help you when you contact one of your local bee and wasp removal services to come and take care of the problem.

The Bee Removers, Inc. © 2015 - Website designed by Flyer Works
Back to Top

- Brains of bees are the size of a sesame seed, which is about 20,000 times smaller then the human brain. - Honeybees have to consume about 8 pounds of honey to produce one pound of beeswax. - Bees will travel up to 3 miles from their hive in search of food. - Honeybees are responsible for pollinating approximately 80% of all fruit, vegetable and seed crops in the United States. - The only bees that die after they sting are honeybees. - Wasps on the other hand are able to sting repeatedly. - Bees can count to four. - Bees communicate with each other by dancing and by using pheromones. - Female yellow jacket workers develop from the fertilized egg and male drones develop from the unfertilized egg. - Bees are part of the third largest insect order, which also includes wasps and ants. - Honeybees fly at 15 miles per hour. - Bee stings actually cause several deaths in the United States each year. - There are 3 kinds of bees in the hive, queen, worker, and drone. - The honeybee queen may lay up to 1,500 eggs each day during her lifetime. - Bees can recognize individual faces. - Honeybees never sleep.